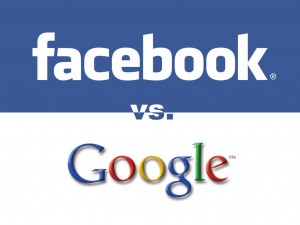 There are many potential epic battles going on in today’s world.
– RIM vs Apple vs Samsung vs Motorola on tablets (HP webOS now gone)……but this battle appears to be over for now with 95% of the population preferring the iPad according to a report published by Robert W. Baird.
– Android vs Apple on phones. While Android is gaining market share, the consumer preference still belongs to Apple.
– Apple vs PC’s on laptops.
– Enterprise software suites with Oracle, IBM, Microsoft offering full suites and a possible merging of HP and SAP for vertical enterprise stack.
And recently, we are seeing a battle for intellectual property between Microsoft, Apple, and Google with the latter buying the assets of Motorola Mobility to shore up their Android defenses.

But, the biggest battle will likely be fought between companies that did not exist before 1997 and whose true assets are only the eyeballs they reach versus any products that are sold. Namely, I am referring to the new social war between Facebook, Twitter, and Google+. While the battle will likely involve Twitter, my interest is on the showdown between FaceBook and Google+ as this will likely comprise the battleground for future corporate users. I will not discuss the merits of how powerful social media can and will be as a future business driver, but more specifically who will win and why.

While there have been other small players in the social networking space, Facebook has had little real competition in the past. While they have close to 700 million users, versus just over 100 million from LinkedIn, the increase in users they are seeing is more from developing countries. According to Inside Facebook, Facebook is actually losing members in the USA & Canada while growing in countries like Mexico, Brazil and India. According to the report, Facebook lost nearly 6 million users falling from 155 million to 149 million just during the month of May. This could be due to some of the privacy issues that have arisen regarding FaceBook policies or could be that Facebook isn’t as “sticky” as many believe. Also many people consider the interface counter-intuitive and the pages are cluttered with a plethora of ads. The introduction of third-party apps in Facebook certainly appealed to many users with the introduction of things like Farmville, but moved it further away from being a business tool with even more clutter and a higher probability of being a time waster.

After previous failed attempts (remember Google Buzz and Google Wave), Google has now offered a new social platform called Google+. While Google+ is still in beta, it has introduced a number of new features that make it attractive and it has grown very quickly. In the first 8 days of existence it had 10 Million members and 20 Million after only 20 days. It is now estimated to be at 25 Million members.

While there are a number of reasons Facebook is losing traction, I believe the reason Google + will win comes down to one small feature Google offers that FaceBook does not (at least not in a way that is intuitive). You see, many users (and I include myself in those numbers) like to segment business contacts from personal contacts. I even lecture about this when I discuss the differences between LinkedIn and Facebook. For me, Facebook is akin to a backyard barbecue with family and friends, while LinkedIn is more like having a professional breakfast meeting with a client. While these two groups occasionally overlap, it is rare that they do with any significance. For this reason all my personal contacts are on Facebook while all my professional contacts are on LinkedIn; and of my 400+ contacts on LinkedIn, only one is on Facebook as well. But in all reality, this issue goes beyond professional versus business contacts. Circles allows me to segment my professional and personal contacts with even finer granularity so I can get an update from someone about a social or professional activity without hearing about their nephews birthday party.

Google+ has addressed the one issue which has precluded me from using Facebook as a business tool to connect and update other business people with the introduction of circles. Circles allow me to create professional group of people that I may or may not have a mutual connection to as well as having other circles of friends, relatives, neighbors, etc. I can segment posts as well as my feeds. This capability is the same as is found in TweetDeck allowing me to keep my work and personal life separate. Google also has additional capabilities built into it’s service including “hangouts”, this allows video conversations with a group of associates and even has an integration to YouTube. While one can see where this could be a large time waster, it also provides the foundation for remote learning and demonstrations.

While Facebook will continue to have traction for B2C engagements, I believe the battle for B2B will go to Google as they continue to roll out additional features including company pages and a tighter integration to search and the other Google properties.

To summarize why I think Google+ will win:
1. Circles – Allowing me to segment my posts and incoming streams so I can have real separation between various aspects of my life.
2. Group video chat and “Hangouts” – Ability to have you and your associates discuss videos or other matters in real time.
3. Privacy – Although Google + profiles themselves cannot be private and they make you use a real name, thanks to circles it is easy to have fine grain control of how my posts are shared
4. No ads – While this may not last, today the Google+ space is not littered with a lot of meaningless ads and the space is clean.
5. “Farmville” free – While Google+ is not game free, Google makes the games less irritating by relegating all the games to a dedicated tab
6. Clean Interface – No doubt the lack of advertisements contribute greatly to this, but the clean, white interface is very pleasing and there is nothing to distract you from the content you are there for.
7. Integration with current and future Google properties – Google+ already works across many of the existing Google products like Gmail and Google Calendar. Rest assured, Google has a history of innovating and Google + will end up being the recipient of the new technologies Google will develop for the future. Company pages will probably be the first of many new features in Google+.

As a former president of MySpace (remember MySpace?), Tom Anderson wrote in July, “It’s because G+ is about people and community. It’s a celebration of our very existence, in a more obvious way than ‘organizing the world’s information’ ever was.” While many can not envision Google + taking over the sheer mass of Facebook, how many of us ever envisioned MySpace being dethroned before Facebook came along?